And then, the total eclipse happened. We crossed from a cloudless, hot, lovely Pacific Northwest August morning to the chilling night within a matter of seconds. It is one of the most magical moments I have ever experienced, one that cannot be described by words. – Corvallis, Oregon. August 21, 2017.

The date of the Great American Solar Eclipse has been saved on my Facebook calendar for years. I simply cannot say no to this once-in-a-lifetime opportunity, especially considering its so many favorable parameters – the total zones passes right above Corvallis, my old stomping ground, and weather on an August morning in Oregon is going to be wonderful. I booked my ticket, made the 8,500 miles trek from Addis Ababa, Ethiopia to Portland, all this time thought that I would be the farthest traveled spectator of the eclipse, only to be easily beaten by Annette, who was traveling all the way back home from Entebbe, Uganda.

We arrived at Portland on the night of the 19th. All the days leading to the eclipse, news has been reported wildly about the scarcity and outrageous charges of hotel, rental cars, a possible run of gasoline and water, and the worst nightmare you can ever imagine about traffic. Well, it was actually not that bad. Oregonians have demonstrated their signature cool at this centennial event, and nothing was as miserable as the papers have predicted. Still, we didn’t feel like playing with chances. We left our Portland hotel at 5 am in the morning, aiming for an early start for the 10 am total eclipse. By seven in the morning we arrived in Corvallis, with plenty of spare time to treat ourselves with an Alaskan salmon bagel breakfast at the New Morning Bakery in Corvallis. The line is quite long at the shop; most has just arrived from either California or Seattle/Vancouver BC. After breakfast we headed to Bald Hill.

The Bald Hill Natural Area is a small, open top mound sitting right in the heart of Willamette Valley and next to Oregon State University’s dairy farm. I used to bike to the hill all the time when I was a student. It provides an IMAX-ish view to the valley below, looking east towards the eclipse. All these years it has been a quiet natural park where few people and dogs would visit, but for this special occasion, it has turned into a fairground – hundreds of cars and tents were parked outside on the open field, and the little hike up the hill was busy as Main St on a Saturday. There were already couple hundreds of people waiting at the top of the hill when we got up there, right around the exact same time the partial eclipse commenced.

There was about an hour from the first shade of the moon until the full eclipse. For the first 45 minutes, you really don’t feel much different. The Sun is so powerful, that even with more than 50% covered, you can still feel its full summer heat. In the last 15 minutes until total eclipse, temperature dropped significantly, the sky has turned visibly dimmer, and the sunlight played an extraordinary trick: not that much different from the golden hours all photographers crave for before sunsets, but the lightening was shining directly from above, not from lower around the horizon. It resulted some interestingly lighted portraits. 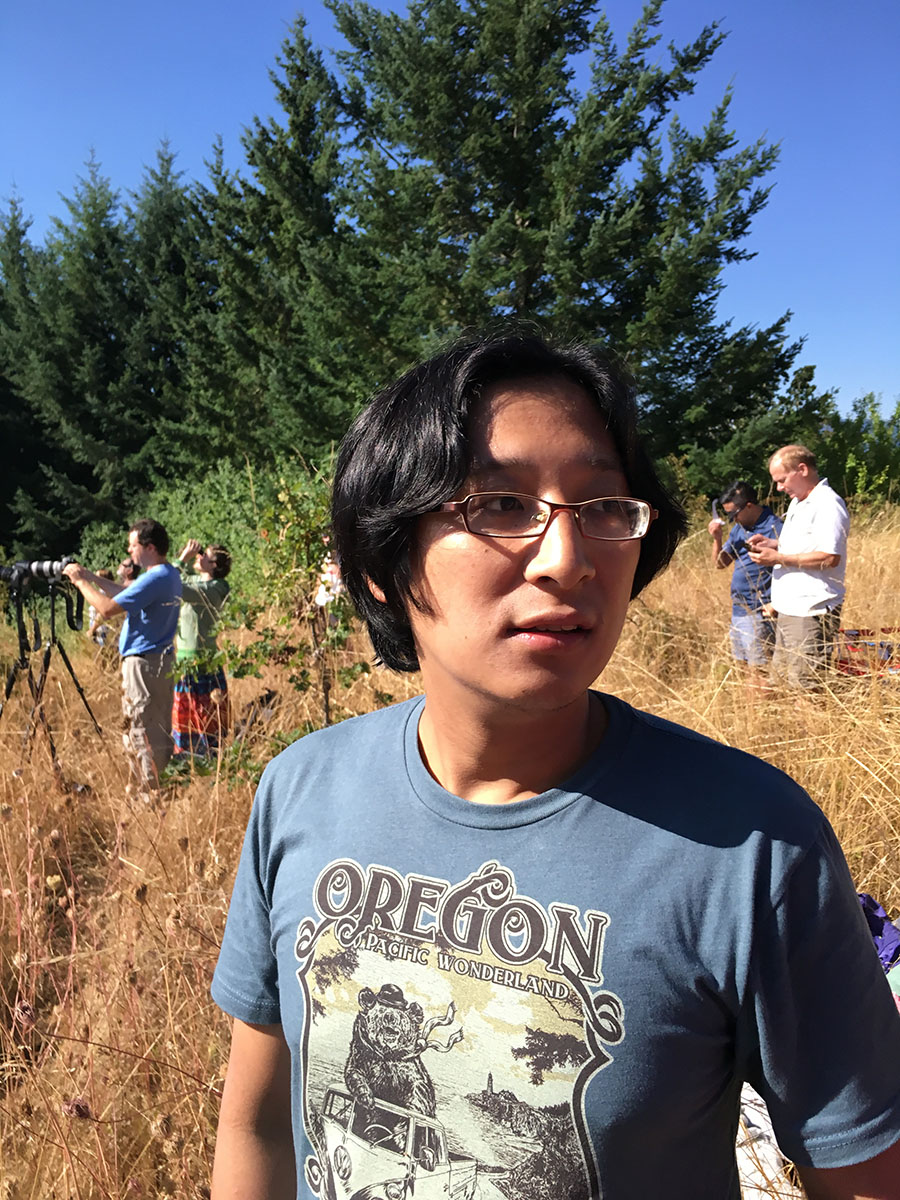 And then, the total eclipse happened. We crossed from a cloudless, hot, lovely Pacific Northwest August morning to the chilling night within a matter of seconds. People and hippies were freaking out, while the birds and the beasts acted quiet and docile, maybe thinking that the night has arrived. At the darkest hour, it felt like standing outside 2 hours after the sunset. It is one of the most magical moments I have ever experienced, one that cannot be described by words.

The total eclipse lasted about 90 seconds. Accompanied by the euphoric cheers and salutes of the crowd, the Sun resumed its power and glory. Somebody was yelling, “Cool, Sun! Do it again!” But he won’t until next time in 2019 in South America.